Thanks for the Memory December 19th Warrington 2021 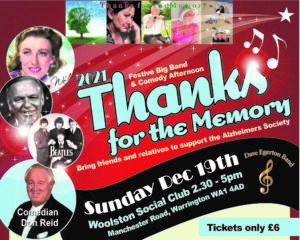 After a short ‘break’ Thanks for the Memory’ is back in Warrington. The concert is once again hosted by the excellent Dave Egerton Band.

Come along and sit back while we take you on a trip down memory lane with music from the early 1920’s to the Swing era; from Glenn Miller to the Beatles; Fred Astaire to Vera Lynn to Van Morrison; Frank Sinatra to The Temptations; from the Supremes to Amy Winehouse ….. and much, much more!

This year we are thrilled to have comedian Don Reid joining us for the first time bringing us some great gags and laughs. Don has worked with many top stars including Russ Conway, Barbara Windsor, Ken Dodd, and Jerry Lee Lewis; and also headlined in Ken Dodd’s “Festival of Comedy”

Of course, there will also be a little touch of Christmas in the air!

Please bring friends and relatives to support the Alzheimer’s Society.

Tickets available via this link

Limited tickets on the door.